Some ways I try to avoid being fat in my fifties

Getting fatter is all about more calories going into your fat cells and less calories coming back out, these measures all aim to improve that balance.

Protein intake doesn't give a lot of calories, so that means I try to eat plenty of fat. I do that by using fatty sources of protein, and I try to use added fat with any carbs I eat - I think of it as a bit like the French approach; not too much bread, but with plenty of butter :)

Unsaturated fats help keep you sensitive to insulin. This means your fat cells keep storing food, which means you get fatter. In the long run, this is bad for your health. (Veggie oils tend to contain lots of omega-6 fatty acids too, which are also very unhealthy.) I suspect the widespread use of veggie oils in packaged food, fast food and restaurant food is one of the biggest problems with our modern diet (and in medical use).

These used to be thought to be bad for you, but views are gradually changing nowadays as the science is understood better and old thoughts are discredited. Eggs and saturated fat are good for your liver, which is important if you're fat, in your 50s and like a drink. Some good sources of saturated fat are beef, lamb, full fat dairy, and coconut oil (an exception to the veggie oil suggestion above). They're also very filling, which is useful if you're trying to eat less.

Up and Down Days

Hardly anyone can stick to a diet every day, it's just not realistic. So I aim to eat more on some days and less on others. This might be up/down every other day, or just 2 really low "fast" days a week, or 2 big "cheat" days at the weekend. Whatever seems convenient at the time.

The point is, it is ok to miss a meal occasionally, in fact it's probably good for you. Eating twice your normal daily amount probably isn't good for you, especially if you do it every week, but eating a little more because ... you want to! ... is ok as long as you're eating a bit less on other days.

So I don't try to stay deadly accurate with my daily calorie intake, that way lies madness. I figure it's ok to eat say 1000 calories one day and then 3000 the next, if I'm aiming for a 2000 average. 1000 calories or less doesn't sound like much, but it's only one day.

Insulin levels in your bloodstream rise after nearly every meal, which stops most fat-burning that might have been happening. If you only eat 2 meals a day, there is more chance of burning some fat between meals. I don't think the timing matters too much, you either get a nice long fast overnight, or two shorter gaps, one after each meal. Even eating just one meal in a day can be ok, particularly if it's a "down" day when you're trying to eat fewer calories.

Like meals, snacks will tend to raise insulin levels, stopping most fat burning. I try and keep any snacks to between my two meals (I generally eat breakfast quite late), so I still get the benefit of a long overnight fast. If I do snack I just view it as a smaller version of what I used to eat as a 3rd meal.

Extra thoughts; wherever possible, eat "real food", not something from a packet with a huge ingredients list. And doing some kind of mild exercise, even just a 10 minute walk, sometime in the first hour or so after a meal is good for reducing glucose and insulin levels in your blood.

Of course, this is just my understanding, which could easily be wrong, and is a simplified view roughly describing what I aim for personally. We're all different in our genes / history / goals / priorities, so some of these ideas may not be useful to you. But hopefully some of them are :)

Email ThisBlogThis!Share to TwitterShare to FacebookShare to Pinterest
Labels: Diet - fat person in their fifties

Summary: Get your HbA1c tested! Values of 30 mmol/mol (4.9%) and above indicate increased glucose in your bloodstream giving a higher chance of heart disease as well as diabetes and a whole list of other undesirable possibilities like eye/nerve/kidney problems that go with it. The safest values may be as low as the 25 - 29 mmol/mol (4.4% - 4.8%) range. The easiest way to lower your hba1c result is to eat fewer carbs.


The HbA1c test indicates how much glucose has been in your bloodstream over the last 2 or 3 months. Higher numbers indicate increased risk of various nasties including heart/circulation problems (and other conditions) as well as the more obvious glucose/diabetes problems it is usually used for.

Diabetes
A value of 48 mmol/mol (6.5%) or above is used as a diagnosis of diabetes, and a value of 42 mmol/mol (6.0%) or above indicates that you're probably heading towards it (they call this "prediabetes"). If you're at 40 or so, your doctor will probably say you're OK, but lower values are better as you can see below ...

Heart/circulation problems
The ARIC study monitored a group of US patients from 1987 onwards. In 2005 this analysis looked at whether Hba1c was an important factor. 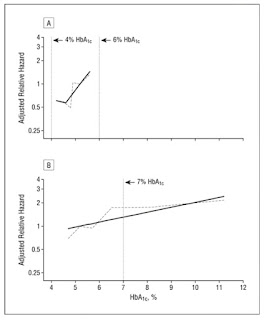 A is the non-diabetic group and B is the diabetics. The grey dotted lines connect the average values for each fifth of the group and the black lines are trend lines estimated in the study. (I would have been tempted to use a curve for the trend in B, but maybe they had a reason not to do that?)

You can see that in general the risk of heart problems goes up as HbA1c rises, although there is maybe a slight rise at very low values for the non-diabetics. Whether you're a diagnosed diabetic or not, the safest area seems to be right near the low end, at values under 5.0%. The authors estimate the lowest risk for non-diabetics indicated by these results is around 4.4% - 4.8% (24.7 - 29.1 mmol/mol), so well below the 42 mmol/mol level where your doctor might start telling you to worry about diabetes. If you can get it down to this kind of level from just below 6.0%, this study suggests you might reduce your chances of heart disease by half or even two thirds!

Alzheimer's, Parkinson's and other neurological problems
This study title days it all:
"Elevated HbA1c is associated with increased risk of incident dementia in primary care patients."
Just to clarify:
"The T2DM diagnosis per se did not increase the risk of either ACD or AD. Higher levels of HbA1c are associated with increased risk of ACD and AD in an elderly population."

Cancer (except prostate):
Does cancer risk increase with HbA1c, independent of diabetes?
"Results:
The data reveal that chronic hyperglycaemia correlates with increased cancer risk for a number of cancers, except prostate cancer. Evidence is also provided that risk is already increased in the pre-diabetic and normal ranges for several cancers."

You can see that high hba1c values are related to a whole list of unpleasant health outcomes. 🙁

What to do
See your doctor to get the hba1c test. If it's higher than you want, e.g. 30+ mmol/mol, eat fewer carbs. When you do eat them, have some fat or vinegar as well to slow down their absorption.

These guys worked it out: 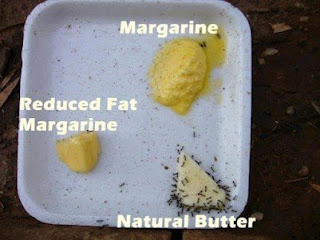 I suspect the UK will get another recession before long, let's say in the next year or two. I'll mention 2 reasons for thinking this; timing and consumer spending/saving.

Cycles
Recessions seem to come round roughly every 9 or 10 years; say 1991, 2000, 2009 ... will the next recession be in 2018? OK, this is a very simplistic approach and the gap between recessions can vary quite a bit. Still it does look like we're approaching the time.

People are overspending
The economy is made of 3 main parts; people, companies and government. For this discussion we're mostly interested in people. A recession happens when people spend less for 6 months or more. This makes companies spend less and employ fewer people and the whole economy gets weaker for a while.

Earlier this year the news came out that the savings ratio was at it's lowest level in over 50 years:
https://www.ons.gov.uk/economy/grossdomesticproductgdp/timeseries/nrjs 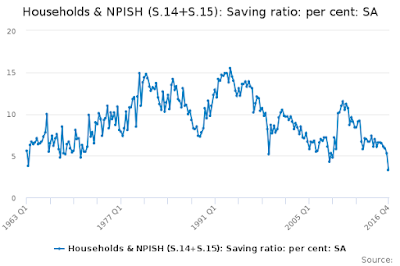 You can see how people have been saving even less than in 2000 and 2007. At some point soon people will decide they can't afford some of those luxuries and they need to save a bit more. And winter will be here again.

General Election
OK, this is maybe a bit cynical, but hey, it involves politicians so I think that's allowed.

In a few days we're going to have a general election. Now there are various theories about why the Tories have decided to call this election just now ... my guess is they realise another recession is on the way and it's better to get the election out of the way before it instead of after.

Email ThisBlogThis!Share to TwitterShare to FacebookShare to Pinterest
Labels: Econ - the next recession

Just saw this article via Peter's Hyperlipid blog, it's a great example of how fat burning is a huge help for endurance exercise; how-adrian-ballinger-summited-everest-without-oxygen
Posted by Malcolm at 22:48 No comments: